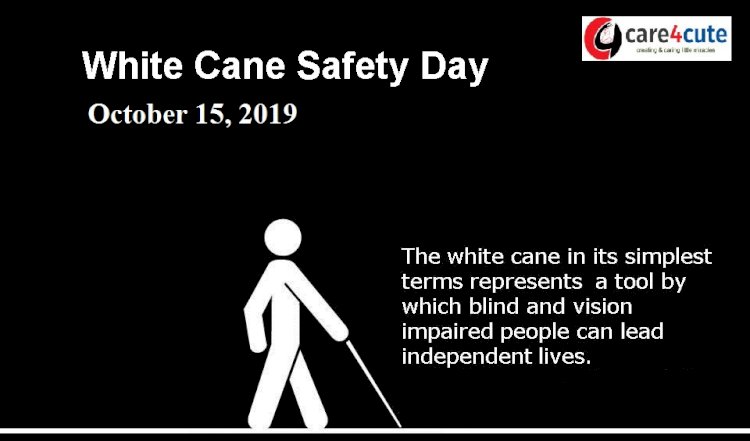 The White Cane Safety Day is a national observance in the United States, which is celebrated every year annually on October 15, since 1964. This particular day is to commemorate the achievements of blind or visually impaired people and the significant symbol of blindness and tool of independence, the white cane.

‘In 1931 in France, Guilly d’Herbemont propelled a national white stick movement for visually impaired individuals and in the USA, President Lyndon Johnson was the first to make this announcement.’

Origin of the White Cane

In 1930, George Bonham watched a man who was blind attempting to cross a street. The man's cane was black and motorists could not see it. So, George Bonham proposed painting the cane white with a red stripe to make it more noticeable.

The standard technique for using a white cane was pioneered in 1922 by Richard E. Hoover, a World War II veteran rehabilitation specialist. His technique of holding a cane in the center of the body and swinging it back and forth before each step to detect obstacles is still called the "Hoover Method".

The prime goal to celebrate the White Cane Day is to spread awareness and educate the world about blindness along with how the blind and visually impaired people can live and work independently while giving back to their societies, to commemorate the successes and abilities achieved by blind people in a sighted world and to honor the numerous contributions being made by the blind and visually impaired people in various different field across the world.

High-tech canes of the future

There are various inventors across the world including India, Great Britain, and France, who equipped white canes with ultrasonic devices, which detect obstacles up to nine feet away. Vibrations in the cane's handle warn users of potential hazards in their path.

Other Awearness Day on 15th October

Parenting is not an easy job to do. Here is the list of things that you should say...

If you are first time become parent and don't know much about baby care, learn about...

Pacifiers: Are they good for your baby? Its Pros & Cons

Pacifiers are becoming a rather taboo subject among modern-day parents. Find out...

World Prematurity Day is commemorated every year to raises awareness of preterm...

As every year World Breastfeeding Week is celebrated from 1 to 7 August to encourage...

Everything That You Need To Know About Asthma