It is possible to have a pregnancy after tubal ligation. Check out the signs, symptoms and risk factors related to this type of preganancy. 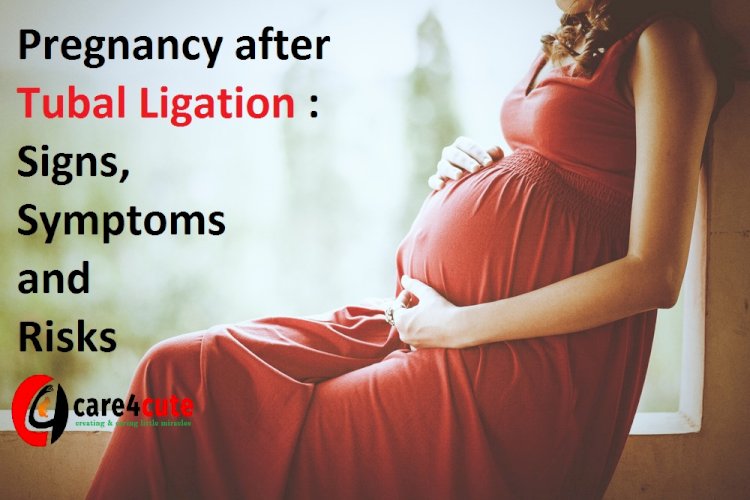 Tubal ligation is a safe and sound method of birth control in women. The word ‘tubal’ refers to the fallopian tubes that carry the eggs and ‘ligation’ means tying off. Hence, tubal ligation is basically a surgical process where the fallopian tubes are tied to prevent the egg from entering into the uterus. This procedure is also known as the female sterilization procedure.

Though pregnancy after tubal ligation is rare, the possibility can’t be denied completely.

Worried to know how it could happen? Read this post to know about the odds and options of getting pregnant post tubal ligation and the risks if any.

The Chances of Pregnancy after Tubal Ligation?

At the time of the surgical procedure, the fallopian tube is cut and then tied off, which leaves a very rare chance for a future pregnancy. However, like any other birth control method, tubal ligation is also not 100% effective. Pregnancy after tubal ligation is possible if:

To weaken the possibility of pregnancy, women usually get a tubal ligation done immediately after the delivery or the first menstrual cycle. If all fails and you still get pregnant, you will experience symptoms identical to that of a healthy pregnancy.

Signs and Symptoms of Pregnancy after Tubal Ligation

If you had a tubal ligation, then know about the following signs and symptoms associated with pregnancy.

The possibility of pregnancy after tubal ligation are very rare. However, it could occur if the procedure fails in any way.

How Common Is Pregnancy After Tubal Ligation?

According to the University of Pittsburgh Medical Center, about 5 in 1000 women get pregnant after one year and 13 in 1000 after five years following this surgical procedure. The failure rate of tubal ligation was estimated to be 1.85% in 10 years.

It was also found about one-third of the pregnancies resulted in an ectopic (pregnancy taking place inside the fallopian tube instead of the uterus) following a tubal ligation. It is believed that pregnancy will generally occur in the first two years post tubal sterilization.

Not that the chances of the pregnancy being ectopic are higher after the procedure. Keep reading to know about that and other risks of pregnancy after tubal ligation.

Risks of Pregnancy after Tubal Ligation

Therefore, if you have had a tubal ligation, get checked for ectopic pregnancy if you experience amenorrhoea or lower abdominal pain. A study including 10,658 women found that the risk of ectopic pregnancy was about 7.3 per 1000 sterilization procedures done within ten years.

If an ectopic pregnancy is treated there is a need to see the doctor as it could be life-threatening. Whether to manage medically or surgically will be decided by your clinician depending upon the size, presence of cardiac activity, chances of rupture and your condition at presentation.

The Symptoms of Ectopic Pregnancy:-

If you feel abnormal bleeding and severe pelvic pain, consult an obstetrician-gynecologist immediately. As the ectopic pregnancy progresses, the risk of fallopian tube rupture increases. You may also experience more severe symptoms including:

Fallopian tube rupture is associated with acute internal bleeding, which could be hazardous to life. So if you experience any of the symptoms mentioned above, visit your doctor immediately.

Who Is at The risk Of Ectopic Pregnancy?

Ectopic pregnancy can happen in women who:

Pregnancy after a tubal ligation needn’t happen just because of an accident. You also have the option of choosing to get pregnant by going for the tubal ligation reversal procedure.

The success rate for tubal ligation reversal is 70-80% based on the method used for the sterilization and the extent of damage to the fallopian tube. Also, women who had undergone this procedure have a moderate risk of getting the egg implanted in the fallopian tube (ectopic pregnancy).

The pregnancy rate with a successful tubal ligation reversal method is around 75% over a time period of two years, with half of the pregnancies occurring in the first six months post tubal ligation.

Now, we are answering a few commonly asked questions about pregnancy after tubal ligation.

1. How can you get pregnant without reversing tubal ligation?

Recently, the surgical reversal procedure has been replaced by the IVF method due to its higher success rates. So, women who wish to get pregnant are counseled for getting IVF done instead of the reversal surgery.

2. What are the complications of tubal ligation?

Like any surgery, tubal ligation is also associated with complications such as bleeding, reaction to anesthesia, infection, injury to organs like bladder, uterus, ovaries, and blood vessels.

No. As there will be no fear of getting pregnant, a woman can have an active sexual life.

Tubal ligation is a good choice if you do not want to have more babies. Also, the possibility of pregnancy increases if the sterilization procedure was done long before. As time passes, you must visit your doctor to ensure that tubal ligation is still effective, especially if you do not want kids anymore. But at any point in your life, if you wish to expand your family, then the reversal procedure keeps your pregnancy chance alive.

All you need to know about HCG Levels after Miscarriage

Precautions for kids during summer

If you have passed 21 weeks of pregnancy, then this is 22nd week now and undoubtedly,...

Obesity is a major health issues all over the world. Check out the scenario of childhood...

Is Olive Oil Safe or not Safe for Babies?

If you are confused that olive oil is safe for your bay or not then read the full...