Is your child is also having problems related to Snoring while he sleeps? Here are the Causes, Treatment, and Tips To Control it in your baby. 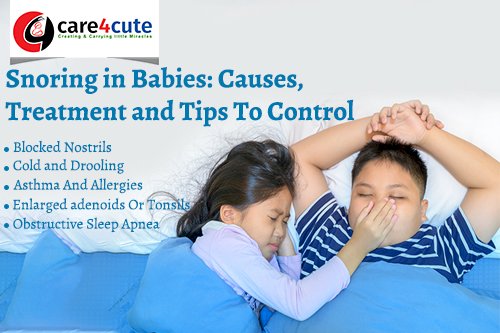 Snoring is a very normal problem that is faced by many people. Noisy breathing that resembles the sound of a rattle is generally called snoring. We usually do not notice snoring in babies. However, snoring, and even snorting, can happen in babies. What could be the reason behind this?

Here, we are explaining the possible causes of snoring and snorting in babies, and the ways to deal with it.

Is snoring and Snorting Common in Babies?

Yes, they are quite common in most babies, including newborns. Nearly one in ten babies snore every night. Snoring happens when the airway in the throat gets obstructed or constricted, making the inhaled air make the throat tissues vibrate. The baby’s muscles, including neck muscles, relax during sleep, thus pressing against the posterior wall of the airways causing the baby to snore. However, it may not be this simple.

The American Academy of Pediatrics recommends parents to be aware of their baby’s snoring pattern, as it is crucial for the timely detection and resolution of underlying problems if any.

NOTE: Snorting is another different sound that babies make when they are suffering from clogged airways. It is a complementary sound to snoring.

What Causes Snoring And Snorting In Babies?

The frequency and chances of a baby snoring and snorting weaken as they grow older. However, it can be due to certain discrepancies and could require medical suggestions:

Blocked nostrils are common among babies since infants are not able yet to blow the mucus out of their nose. A blocked nostril can also occur due to some more serious problems like choanal atresia. It is a congenital condition where a bony or cartilaginous structure blocks the back of a nostril. This may result in a sparse flow of air through the nose, making the baby snore during sleep. There is an another condition called deviated nasal septum, where one nasal passage is straight while the other one is crooked. This shrinks the passage of one nostril and may lead to snoring and snorting.

Symptoms: The baby may show discomfort in breathing and have a runny nose all the time. A constricted nasal passage may make the baby breathe from the mouth.

Treatment: Such a condition can be treated by surgery as surgery can cure the condition by removing the bony structure that hinders the nostril. If the bone cannot be removed, a hole is drilled into the bone, and a stent is inserted to prevent regrowth. For deviated nasal septum, surgery can easily straighten the nasal passages. If the baby’s nose is blocked by mucus, then a medical practitioner will remove it using a nasal pump.

Cold causes formation of mucus in the nostril and result in snoring. A cold may lead to nasal congestion, which can cause airway constriction, thus making the baby snore during sleep. Also, teething babies may salivate a lot, and this drool can trickle to their nasal cavity when they are lying on their back, making them snore.

Symptoms: If the baby has a cold, then they may show other symptoms of a cold such as a runny nose and perhaps mild fever. If they are teething, then they might drool a lot.

Treatment: A simple nasal pump and saline solution can be used under medical supervision to treat the nasal blockage.

Asthma and allergies can also trigger snoring and snorting, although they are not the only symptoms of asthma (6). Asthma generally has a direct link with respiratory allergies, and thus allergy-induced asthma may lead to snoring.

Symptoms: The baby will show all the other major symptoms of asthma, such as shortness of breath and early fatigue while playing.

Treatment: Asthma cannot be treated but can be effectively controlled with easy-to-administer respiratory medicines.

An infection of adenoids and tonsils can cause constricting pressure on the airways. As mentioned earlier, this can lead to sleep apnea.

Both adenoids and tonsils are part of the lymphatic system, which plays a major role in preserving the respiratory system from infections, but they are themselves vulnerable to infections. An infected adenoid or tonsil will extend in size and hinder the tiny airways of the baby, causing them to snore and snort.

Symptoms: Enlarged tonsils can be easily spotted near the lateral side of the throat, inside the baby’s mouth. An adenoid is not visible through the mouth, and enlargement can be diagnosed through symptoms like chronic mouth breathing, open jaw, and troubled breathing through the nose.

Treatment: Tonsil and adenoid infections can be treated with antibiotic medication. In the case of acute infections, the tissue may have to be surgically removed.

This is a major reason of snoring in babies. Obstructive sleep apnea occurs when a baby’s airway is partially or completely obstructed when the anterior section of the airway presses against the posterior section. The air that passes through the airway ake the neck tissues vibrate, causing snoring.

Sleep apnea is generally caused by the accumulation of mucus in the baby’s airways or due to other reasons like enlarged adenoids or tonsils.

Symptoms: Snoring every day is one symptom of sleep apnea. The baby wakes up with a start at least once during the sleep, gasping for breath, and suffocated. This is accompanied by snorting, sometimes.

During the daytime, the child may seem excessively sleepy, even in the absence of any other medical issue.

Treatment: Babies have sensitive brains, which cannot be devoid of oxygen even for a few seconds. Therefore, such a situation needs swift medical attention. A doctor will identity the underlying cause for sleep apnea (obstruction, mucus, etc.) and prescribe a treatment. Surgery is necessary only in a few extreme cases. Normally, the snoring subsides without any invasive medical intervention.

A baby may snore owing to weak muscle tone and facial features caused by genetic disorders such as down syndrome. This condition causes an enhanced tongue, flattened nose, and smaller jaw – all that may constrain the airways. Some neuromuscular disorders such as cerebral palsy or muscular dystrophy loosen the tongue muscles causing it to fall back and perturb the airway (8).

Symptoms: A baby will show other classic symptoms of these genetic and neuromuscular disorders. Snoring itself is not a leading symptom of these disorders.

Treatment: There is usually no treatment for these conditions, but parents can learn to control them with training by a medical practitioner.

A doctor can effectively diagnose each of these conditions. Once your baby is on course with the treatment, you need to make sure that they take the medicines on time.

Sometimes, what sounds like the baby snoring may be something else. Find out more next.

When Does It Sound Like Snoring But It Is Not?

Sometimes when the baby appears to be snoring, but the sound originates from the baby’s throat. This is called stridor, which is the medical term for noisy breathing. The following can be the reasons of it:-

While these conditions warrant medical attention, there are some situations where you must consult doctor quickly.

When to See A Doctor?

Following are some conditions when you must promptly take your baby to a doctor:

1. When the breathing is erratic: If the baby stops breathing for several seconds while snoring, then there is something serious going on, and you must not wait for their snoring to reduce on its own. Staying breathless, even for a few seconds, can adversely affect the baby’s internal organs.

3. When the sound of snoring and snorting is shrill or very loud: When the snoring sounds like a noise that pierces your ears. Loud snoring for a little baby is not common, and you should immediately consult a doctor.

4. When snoring is interfering with the sleep: If snoring keeps them awake or makes it difficult for them to enjoy continuous sleep, then get them checked by a doctor.

Tips To Control A Baby’s Snoring And Snorting

Here are some basic tips which can be followed to control snoring and snorting in your baby:

1. Make them sleep in the right position: The best thing you can do is to make the baby sleep in the right posture. Adults are usually suggested to sleep on their side to prevent snoring, but this position is not safe for the baby, so never try that out. The best position for your baby’s sleeping is on their back. When lying on the back, you can tilt their head in one direction to reduce the chances of airway constriction. Keep alternating and tilt the head to different sides at regular intervals.

2. Keep allergens away: Maintaining a neat and clean surrounding helps prevent exposure to potential allergens that may cause cold, allergies, and other respiratory problems that cause snoring and snorting. Keep the baby’s bedroom well ventilated.

3. Use a humidifier if conditions are dry: Dry air can irritate the baby’s sensitive airways. Humidifiers are devices that pump water vapor in the air to maintain an optimum level of humidity for effortless breathing. It does not treat snoring and snorting but can make breathing more comfortable and easy for the baby.

4. Use saline drops or aspirator: If the baby has a stuffy nose that’s causing snoring, cleaning the nose should be the immediate practice. For cleaning the nose, saline drops can be used. However,saline drops must be used only under pediatric guidance. You can also use nasal bulb syringe or an aspirator to remove the mucus. This will unclose the baby’s nasal passage and could possibly provide relief from snoring too.

Do not try any remedies or over-the-counter snoring medicines as they are not meant for babies. Some type of snoring is normal but if the situation is chronic and the snoring and snorting get noisier every day, then promptly take your baby to a pediatrician.

Nasal Congestion In Infants – Symptoms and Causes You Should Be Aware Of!

What is Scabies and how it is treated?

Precautions during fever in a child with past history of...