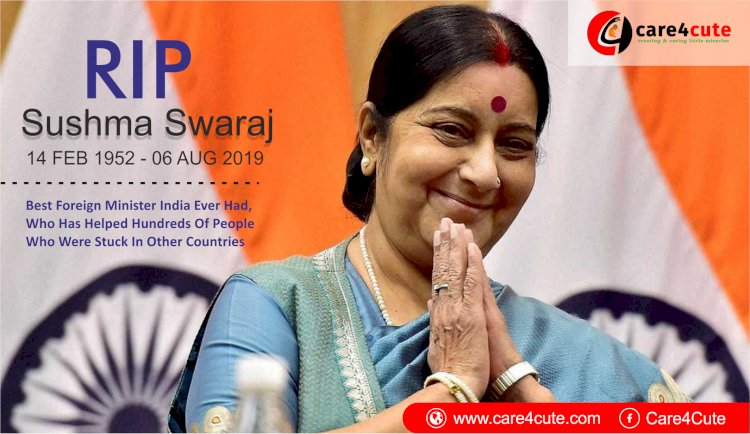 Sushma Swaraj 67, the Former external affairs minister passed away on Tuesday after suffering a cardiac arrest. She was admitted to the All India Institute of Medical Sciences in New Delhi after she suffers a cardiac arrest.

The senior BJP leader, who underwent a kidney transplant in 2016, had opted out of contesting in the 2019 Lok Sabha elections citing ill health.

As a union minister, she kept up an exhausting schedule traveling overseas to meet her counterparts after her recovery from her surgery.

She was a favorite on Twitter during her term in office responding to calls and messages of distress from Indians all over the world.

Earlier on Tuesday she expressed delight over the passing of key bills pertaining to Jammu, Kashmir, and Ladakh and thanked Prime Minister Narendra Modi for the same.

"Thank you Prime Minister. Thank you very much. I was waiting to see this day in my lifetime," Sushma Swaraj tweeted at 7:23 pm.

Sushma Swaraj who was the foreign minister 26 May 2014 to 30 May 2019, was the second woman to hold the office, after Indira Gandhi. She had won from Vidisha constituency in Madhya Pradesh for a second term n 2014, retaining her seat by a margin of over 400,000 votes.

At the age of 25 in 1977, she became the youngest cabinet minister in Haryana. She also served as the chief minister of Delhi in 1998.

Prime Minister Narendra Modi expressed sadness at the death of the foreign minister in his first term said her death is a "personal loss".

Even though now you are not with us, but Ma'am you will always remain alive in the heart of millions of people not only of India but even across the world for a lifetime and you will always be inspirational to numerous people.

We will always going to miss you, Ma'am!

Learn about the signs and symptoms of autism in babies from 0 to 12 months. Here...

Signs and symptoms of labor

Important precautions for a healthy pregnancy

While pregnancy time, every woman must take proper care of herself to stay healthy....

The World Youth Skills Day was observed across the world, every year on July 15....