Is your child is suffering from UTI related health issues? Here are all the information related to its UTI Causes, Symptoms And Home Remedies. 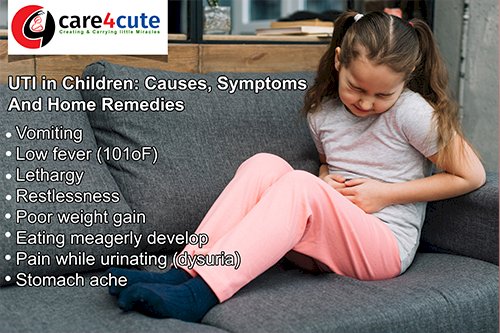 The urinary tract comprises of  the kidneys, ureters  and the bladder. They work in combination to alienate the waste and extra fluids out of our body in the form of urine.

But often, the process may not be smooth due to an infection of the urinary tract.

Urinary tract infection or UTI is quite common in adults. Can children also be affected by it? How can you know if the child has UTI and what can you do about it? Keep reading this post.

UTI is the “microbial invasion” on any part of the urinary system.

The bacteria that generate inside the urethra get flushed out through urine. But sometimes, when they are not expelled, it results in an infection in the urinary tract.

About 80% of the cases are caused by Escherichia coli (E.Coli) and the rest by other species including Klebsiella and Staphylococcus.

The urinary tract infection mainly occurs in the bladder, but the kidney may also be affected by it.

We can classify UTI based on the area of infection:

The infection is more common in girls than in boys due to their anatomy. Let’s see why the infection can happen in children, especially in girls.

A child can be affected by urinary tract infection due to one or many of the following reasons:

Some children are more prone to developing UTI due to other health concerns such as:

Vesicoureteral reflux (VUR) is an unusual condition where the urine flows backward from the bladder to the kidneys, leading to kidney infections. This is interrelated to UTI.

As mentioned above, girls are at a higher risk than boys. However, there are other risk factors too.

If your child complains of burning sensation or pain while urinating, look out for the other symptoms of UTI.

Symptoms of UTI in Children

It is not easy to identify UTI in young children as the most symptoms are not specific such as.

Older children can tell their problem, and here are the symptoms they might have.

If the infection spreads to the kidneys, the symptoms will include:

If your child has a combination of the above symptoms, call your doctor immediately

Treatment of UTI In Children

The doctor will begin with generic diagnosis by asking about the child’s general health condition and symptoms.

A urine culture helps identify the species of bacteria that is causing the infection.

If the child has recurring UTI episodes, then some more test may be suggested by the doctor to check if it’s happening because of an anatomical defect. In such cases, diagnosis methods include:

The imaging tests need to be sparingly used considering the costs involved and the adverse effects such as radiation. They are done only if the UTI is recurrent or complicated.

Once UTI is confirmed by the tests, the antibiotic treatment will be started by the doctor.

Treatment for UTI in Children

The following treatments may be recommended by the doctor for your child:

Some antibiotic medicines given to children are.

Alternative treatments may also be tried such as homeopathy if the UTI is recurrent and the antibiotics are not working effectively. Homeopathic treatments work towards a long-term and overall recovery of the patient.

Depending on a patient’s symptoms, the homeopathic practitioner may suggest  phosphorus, colibacillinum, platinum metallicum, candida albicans, causticum, cantharis and eupatropium .

The medicines should not be started without consulting a specialist.

In addition to the medications, you may support the treatment with some home care and remedies.

Here are some UTI home remedies that may be tried for your child:

Note that these home remedies may be taken along with antibiotic treatment but not as its replacement. However, the best way to deal with UTI is to prevent it.

How to Prevent UTI In Children?

Here is how UTI can be avoided by your child.

Yogurt can be added to your kid’s diet as it is a probiotic.

Good toilet habits and hygiene can prevent UTI significantly. And prevention is necessary if you want to avoid the complications, though rare.

Complications Of UTI In Children

The following are some complications arising from UTI:

Note that the complications are unusual and happen in the extreme cases of infection.

Next, we will answer some more commonly asked questions on UTI in children.

1. What is recurrent UTI in children and how to manage?

Very few children have a recurring UTI. However, if a child has had UTI before, it is necessary to keep an eye on any symptoms. Whenever, the symptoms return, consult the doctor immediately.

If your child has a health problem that may increase the risk of UTI, such as structural abnormality of the urinary tract, the healthcare provider may give antibiotics in low dose as a long-term preventive measure for recurrent breakouts.

2. Is UTI in children contagious?

Urinary tract infection is not contagious. Touch or physical proximity never spread UTI. It also does not spread from sitting on a toilet seat that is contaminated.

3. How long do UTIs in children last?

The child can get relief within two to three days once the treatment is started.

UTI is one of the most common infections in children. However, they recover from it within a few days and get back to normal life. Check on the child’s symptoms and take them to a doctor to control the infection before it spreads. A little care will help in a great way.

Does your child have a kidney disorder? Do you know about the nephrotic syndrome?...

Teeth Grinding (Bruxism) – Does It Have Any Kind Of Significance?

Avoid consulting your child to RMP’s

Check out what kind of skincare mistakes we are making and how to avoid it.

What are the symptoms of male infertility?

The International Day of Charity is observed annually on 5 September. It was declared...