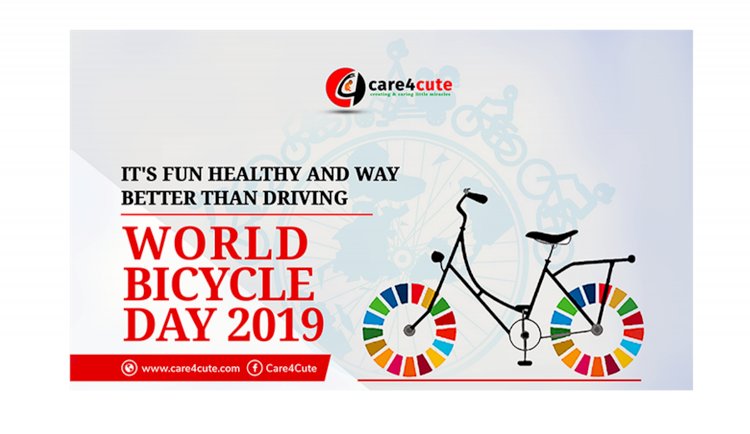 All over the world, 3rd June is celebrated as a – “World bicycle Day”. On 12th April 2018, all 193 United Nations General Assembly’s member states adopted a resolution at the 72nd session of General Assembly– General Assembly Resolution A/Res/72/272, to declare 3rd June as the “World Bicycle Day”, to be observed annually – worldwide.

This will be the second year when we are celebrating this day after the UN General Assembly declared it last year to acknowledge the uniqueness, longevity and the importance of the bicycle. This is because a bicycle is an environmentally friendly mode of transportation along with it is simple, affordable, reliable to use. This day also aims to promote the use of bicycles as a means of fostering sustainable development, promoting health and tolerance, strengthening education, including physical education for children and young people, preventing disease, mutual understanding and respect, facilitating social inclusion and a culture of peace.

In India too, this day is celebrated and last year Vice President of India Venkaiah Naidu had flagged off a cycling rally in Connaught Place in Delhi on June 03, 2018 for the occasion of this day. Over 10000 cyclists took to streets of Delhi, to celebrate World Bicycle Day.

Why to celebrate – World Bicycle Day?

World Bicycle Day is celebrated to acknowledge the role of the bicycle as an economical, sustainable and environment-friendly mode of transport. Some of the most important advantages of bicycle, justifying the celebration of World Bicycle Day are explained below-

This is the best mode of transportation as a bicycle doesn’t require any kind of fuel that will produce any type of harmful smoke or any other kind of waste material that will pollute the environment.

Bicycle is a much healthier mode of transportation as compared to others. It has been proven that the use of bicycle help in reducing stress improves mood and reduces the risk of heart diseases and diabetes. This is because by using a bicycle we are doing some physical exercise and by this, there is a better blood circulation in the body.

A bicycle also assists in providing access to education and health care. We can say it served as a basic and primary tool for development. It provides as a chief transportation alternative for most of the students to reach out their schools and other institutions, basically for the children residing in remote locations in underdeveloped or developing countries like Africa and some countries in South Asia. Contemporary, bicycles are popularly used in the cities like Amsterdam, Copenhagen, and Delhi, etc.

Today, in the face of population expansion, it is getting very difficult to find a convenient parking space for your vehicle. Bicycle relieves you from the stress of parking as it could be practically parked anywhere and in a very little space. As compare to other vehicles like car, bicycle occupies almost negligible space.

Best massage oil for your baby

Are you worried about your belly fat and seeking for the ways to reduce it? Here...

How to deal with depression during isolation period

International Left-Handers Day is celebrated on August 13 annually to celebrate...

Breast self-Examinations what is the signification and...

Is your child is suffering from UTI related health issues? Here are all the information...

Check out Back-to-school tips for parents

As the schools are again going to reopen soon, here are the back-to-school tips...