Obesity is a major health issues all over the world. Check out the scenario of childhood obesity in India along with its causes and other key information. 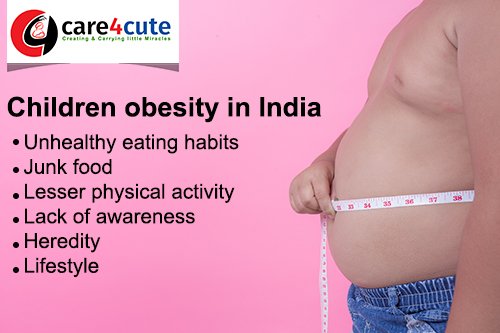 Presently, Childhood obesity is an extremely important issue in India. Because at present around 14 million children are in obesity criteria. And if this obesity rate continuously increases with the same speed, the day is not so far when India will become the first country in childhood obesity.

It is estimated that by 2025, India will stand second having over 25 million obese children among 184 countries where the number of obese children are concerned, according to a study.

This is one of the main causes of obesity. Obesity never comes overnight; it develops due to poor diet. And wrong eating habits from the childhood also make       people obese.

Globally, as people tend to eat out more often, the consumption of junk food is among major causes of obesity. During childhood, children who developed the habit of junk food will find it hard to develop good eating habits.

A large part of population still lacks basic knowledge about nutrition and balanced diet, which is a major cause of obesity.

The growing environment plays a huge role. Often parents remain ignorant about their children being overweight, as in their eyes they are perfect. This denial takes the form of parental praise of the child for being ‘healthy’ (which actually means overweight). These days Children are provided extra levels of comfort as everything is provided on a platter by doting parents. Children are more used to traveling by car or bike. Gone are the days when children used to go to school on foot. Exercise in the form of outdoor games is almost missing in the activity sheet of children due to various reasons. The number of gadgets that surround children these days is astonishing. They spend more time in mobile phones, TVs, computers or playing video games, rather than going for outdoor games that involve physical effort.

What are the measures steps that can be taken:-

Getting Acrylic Nails When Pregnant- Precautions, Safety Measures and Other things...

How to measure body temperature in children?

Thyroid Disorder and Infertility – Is There Any Connection?

What are thyroid disorders and how its dysfunction is related to fertility in both...

World Diabetes Awareness Day is commemorated every year on 14 November to create...

How to take care of your baby during hot season?

Now that you’re 16 weeks pregnant, things are really starting to gear up. Your tiny...

Pacifiers: Are they good for your baby? Its Pros & Cons

Pacifiers are becoming a rather taboo subject among modern-day parents. Find out...