World Aids Day is commemorated every year on 1st December. Check out all the important things related to HIV/AIDS - Symptoms. causes, etc. 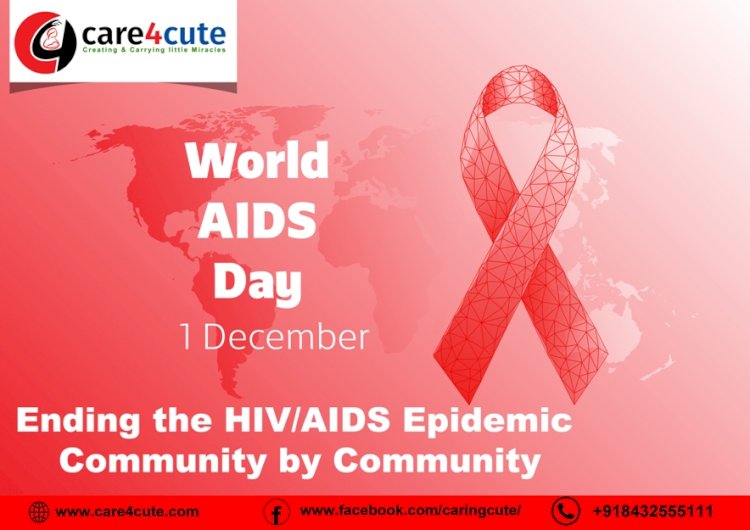 World Aids day is celebrated on 1st December of every year. It is celebrated to raise awareness, educate and improve the understanding about AIDS and global spread of the HIV virus. It provides an opportunity to understand the enourmosity    of the AIDS pandemic and nation’s responsibility to ensure universal treatment, care and support for people living with HIV and AIDS.

On this day UNAIDS is campaigning for people to know their HIV status and their viral load. Theme for this year’s world Aids day is “Ending the HIV/AIDS epidemic Community by community.”

According to UNAIDS data 2019 report, an estimated

Among the states, Maharashtra has the highest number of PLHIV (more than 3.30 Lakhs) and followed by Andhra Pradesh.

India is estimated to have 22.67 thousand HIV positive women who gave birth in  2017.Mother to child transmission in  Maharashtra has highest number (2.41 thousand) followed by Uttar Pradesh, Bihar, Andhra Pradesh and Karnataka.

HIV (human immunodeficiency virus) is a virus that damages the immune system. The immune system helps the body fighting infections, making a person more vulnerable to other infections and diseases.

HIV is a sexually transmitted infection (STI) and it can also be spread by contact with infected blood or from mother to child during pregnancy or breastfeeding.  The most advanced stage of HIV infection is called as Acquired immunodeficiency Syndrome (AIDS), which can take from 2 to 15 years to develop if not treated, depending on the individual.  AIDS is defined by the development of certain cancers, recurrent infections or other severe clinical manifestations.

The symptoms of HIV and AIDS vary depending on the stage of infection. People living with HIV tends to be most infectious during first few months after being infected. Many are unaware of their status until the later stages. There are three stages of HIV and symptoms develop accordingly.

Most people infected by HIV develop flu-like illness within 2 to 6 weeks after the virus enters the body. It is called acute retroviral syndrome or primary HIV infection. Possible flu-like signs and symptoms include:

These patients might have come into contact with someone with HIV in the past 2 to 6 weeks.  The infection spreads more easily during primary infection than during the next stage.

Persistent swelling of lymph nodes occurs during this stage. People may not feel sick or have any major symptoms.  HIV virus remains in the body and now it infects white blood cells. This stage is also called chronic HIV infection. Without treatment, this stage of  HIV lasts around 10 years, but more severe disease may develop  much sooner. Chronic symptoms are as following:

AIDS is the advance stage of HIV infection. In this CD4 T- cell count drops below 200 and immune system gets severely damaged.  It is defined by the occurrence of any of more than 20 opportunistic infections. The signs and symptoms such as:

HIV virus is a retrovirus that was found in 1983. The virus is responsible for causing Acquired immunodeficiency Syndrome (AIDS).  To become infected with HIV infected blood, semen or vaginal secretions must enter the human body. HIV infection is spread through several ways:

Blood transfusion: In some cases blood product or organs transplants that are contaminated with HIV can result into HIV infection.

During pregnancy or delivery or through breast feeding: A pregnant woman infected with HIV virus can transmit the virus to baby during pregnancy, birth or breastfeeding.

HIV is not transmitted in these cases:

Risk factors: Risk factor makes the chances of getting a diseases or condition higher. Lifestyle factors are linked to HIV infection. Anyone of any age, race, sex or orientation can be infected. There are the higher risk factors of HIV/AIDS as following:

HIV is commonly diagnosed through diagnostic test. These tests look for antibodies to the virus that the body creates in an attempt to fight the virus. Most health care providers offer HIV testing, often with appropriate counseling. During testing doctor will ask about medical history, symptoms and perform a physical examination. The primary test for diagnosing HIV/AIDS is ELIS,  which is used to detect the HIV antibody. Oral fluid collected from the cheeks and gums may be used to perform an ELISA. It checks for certain proteins that the body makes in response to HIV. A reactive ELISA for all samples must be used with confirmatory test, such as western blood test to make a positive diagnosis.

Prevention of HIV/AIDS: There is no vaccine to prevent HIV infection and no cure for AIDS. But it can be prevented.

There is no cure for HIV/AIDS, but many different drugs are available to control the virus. The main treatment of HIV is ART (antiretroviral therapy) , a combination of daily medications that stops the virus.  ART suppress viral replication within a person’s body and strengthen an individual’s immune system to fight with infections. There are six classes of antiretroviral medications.

Awareness is the best prevention for AIDS. There is no cure for HIV infection. However effective antiretroviral drugs can control the virus and help prevent transmission.

An Insight about Surrogacy!

Laws in front of science: Egg freezing became an option...

Giving massage to your baby is good for its health but it is also very important...