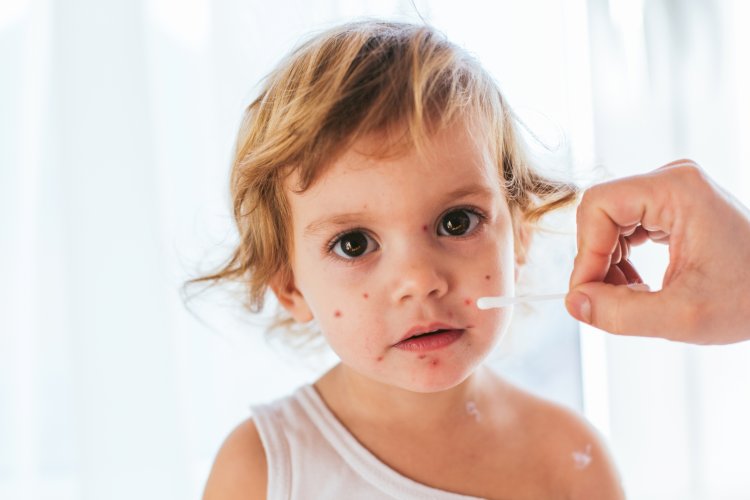 Information about the disease and vaccines

Chickenpox is caused by a virus, the varicella-zoster virus.

How does chickenpox spread?

How long does it take to show signs of chickenpox after being exposed?

It takes from 10 to 21 days to develop symptoms after being exposed to a person infected with chick­enpox. The usual time period is 14–16 days.

What are the symptoms of chickenpox?

The most common symptoms of chickenpox are rash, fever, coughing, fussiness, headache, and loss of appetite. The rash usually develops on the scalp and body, and then spreads to the face, arms, and legs. The rash usually forms 200–500 itchy blisters in several successive crops. The illness lasts about 5–10 days.

How serious is chickenpox?

Many cases of chickenpox are mild, but deaths from this disease can occur. Before vaccine became avail­able, about 100 people died every year in the United States from chickenpox. Most of these people were previously healthy. Chickenpox also accounted for about 11,000 hospitalizations each year. Even chil­dren with average cases of chickenpox are uncom­fortable and need to be kept out of daycare or school for a week or more.

What are possible complications from chickenpox?

How do I know if my child has chickenpox?

Usually chickenpox can be diagnosed by disease history and appearance alone. Adults who need to know if they've had chickenpox in the past can have this determined by a laboratory test. Chickenpox is much less common now than it was before a vaccine became available, so parents, doctors, and nurses are less familiar with it. It may be necessary to perform laboratory testing for children to confirm chicken­pox.

How long is a person with chickenpox contagious?

Patients with chickenpox are contagious for 1–2 days before the rash appears and continue to be conta­gious through the first 4–5 days or until all the blis­ters are crusted over.

Is there a treatment for chickenpox?

Most cases of chickenpox in otherwise healthy chil­dren are treated with bed rest, fluids, and control of fever.

Acetaminophen may be given for fever control.

Chickenpox may be treated with an antiviral drug in serious cases, depending on the patient's age and health, the extent of the infection, and the timing of the treatment.

Can you get chickenpox more than once?

Most people are immune to chickenpox after having the disease. However, although it is not common, second cases of chickenpox can occur, particularly in immunocompromised people.

If I think my child has been exposed to chickenpox, what should I do?

If the child has had chickenpox or has been vacci­nated, nothing needs to be done. It is recommended that a susceptible person (one who has never had chickenpox) receive the chickenpox vaccine as soon as possible after being exposed to the virus. There is evidence that the vaccine may prevent illness or reduce the seriousness of the disease, if given within 3 to 5 days following exposure. Even if the person was not infected with the chickenpox virus from the exposure, receiving the vaccination will prevent future disease.

How are chickenpox and shingles related?

Both chickenpox and shingles are caused by the same virus. After a person has had chickenpox, the virus remains in the body permanently, but silently. About one-third of all people who have been infected with chickenpox later develop the disease known as herpes zoster, or shingles. Symptoms of shingles are pain, itching, blisters, and loss of feeling along a nerve. Most cases occur in people older than 50, and the risk of developing shingles increases with age.

What kind of vaccine is it?

The chickenpox vaccine is a live attenuated vaccine. This means the live, disease-producing virus was modified, or weakened, in the laboratory to produce an organism that can grow and produce immunity in the body without causing illness.

How is this vaccine administered?

The chickenpox vaccine is a shot, given in the fatty tissue. It should be given at the same visit as all other recommended vaccines.

Who should get this vaccine?

Chickenpox vaccine is recommended for the follow­ing:

Anyone who is overdue for receiving a dose should get the missed dose at their next visit to their doc­tor or clinic.

Who recommends this vaccine?

Should adults be tested before vaccination to see if they are already immune to chickenpox?

Currently, 90% of adults are immune to chickenpox because of having had the disease as children. If you have a history of chickenpox disease, you don't need testing or vaccination, unless you are working in an environment where your immune status must be documented (such as in a hospital). If you are uncertain of your medical history, blood testing can be done to see if immunization is appropriate.

How safe is chickenpox (varicella) vaccine?

Tens of millions of doses of varicella vaccine have been given , and studies continue to show that the vaccine is safe. Serious side effects are very rare.

What side effects have been reported with this vaccine?

Possible side effects are generally mild and include redness, stiffness, and soreness at the injection site; such localized reactions occur in 19% of children im­munized and 24% of adolescents and adults (slightly more following the second dose). A small percentage of people develop a mild rash, usually around the spot where the shot was given.

How effective is this vaccine?

Although some vaccinated children (about 2%) will still get chickenpox, they generally will have a much milder form of the disease, with fewer blisters (typi­cally fewer than 50), lower fever, and a more rapid recovery.

Isn't it better for a child to get chickenpox naturally?

Some parents purposely seek to get their children infected with varicella virus, even promoting "chick­enpox parties" for this purpose. The belief is that it's better to be infected when young, a time when the infection is ordinarily less severe. Some parents also believe that something "natural" (the disease) is better than something "artificial" (the vaccine), or that immunity derived from the disease will be more permanent than that from the vaccine.

However, when a safe vaccine is available, parents need to weigh the supposed benefits of infection against its potential risks, including severe disease with complications such as infection with flesh-eat­ing bacteria. No one can predict which child will develop a life-threatening case of chickenpox; in fact, most serious cases occur in previously healthy children.

In addition, in a recent study, 7 out of 10 children said given the choice, they'd rather have the shot than have the natural disease.

Can the vaccine protect you if you've already been exposed to chickenpox?

Who should not receive the chickenpox vaccine?

People with weakened immune systems and those with life-threatening allergies to gelatin or the an­tibiotic neomycin should not receive this vaccine.

People who had a severe allergic reaction to a prior dose of this vaccine should not receive a second dose.

Pregnant women and women attempting to become pregnant should not receive this vaccine, as the pos­sible effects on fetal development are unknown. However, non-pregnant women of childbearing age who have never had the disease may be immunized against chickenpox to avoid contracting the disease while pregnant.

Can the vaccine cause chickenpox?

Because this vaccine is made from a live, but weak­ened, virus, about 1% of recipients develop a mild form of the disease, consisting of a limited rash, most often with only 5–6 blisters. Usually there is no fever. These people are then safe from the more serious, naturally occurring form of the virus.

Can the varicella vaccine virus be transmitted (caught) from a person who was vaccinated?

Yes; however, transmission of the varicella vaccine virus is extremely rare. It has only been documented in healthy people on five occasions out of more than 55 million doses of vaccine distributed. All five cases resulted in mild disease without complications.

Can the vaccine cause herpes zoster (shingles)?

Yes, this is possible. The risk of zoster following vac­cination appears to be less than that following infec­tion with the varicella virus. The majority of cases of shingles following vaccine have been mild and have not been associated with serious complications.

What is hepatitis B?

Some foods, however, aid especially in male fertility. Read more about a list of...

How to Sanitize Your Mobile Phone for COVID-19

To protect yourself from CoronaVirus Infection here is the step about How to Sanitize...

This year theme of world coconut day 2019 is Coconut for family wellnesses by the...

Nappy rash – how to avoid? Tips and advice for the parents

Protein requirements of infants and children

Protein is one of the very essential nutrition that every infant and growing child...